2016 was dominated by the U.S. and U.K. (Brexit) elections, U.S. Federal Reserve rate increases, and oil prices. These three global concerns will continue to drive international trade, monetary flows, and government stability in 2017. At the intersection of politics, money, and oil Onyx Research anticipates many trading opportunities in 2017.

Trump has promised to “make America Great again” as president. Here are a few facts on what Donald Trump has the power to change.

Facts.
(1) The Constitution prohibits the President from changing statutes unilaterally.

(2) The President can act to rapidly reverse previous administration policies.

(3) Repeal difficulty (time) depends on whether the path is through an executive order, agency policy statements, or agency rules.

(4) Obama’s executive orders can be immediately revoked, modified, or superseded.

(5) The President can direct executive branch agencies to withdraw discretionary directives and guidance documents that do not have the force and effect of law.

(6) Agency rules, which have the force and effect of law, and regulations can be repealed, but the process is slow (a notice and comment period required – 30 days or more there is however a good cause provision with a high legal bar).

In the U.K. recent events suggest that the Brexit may occur “harder” than expected. This belief has pushed the currency to fresh lows, however, Theresa May's comments on January 17th indicate a clean, but methodical exit in the next two years. Since late 2007 the pound has dropped 43%. Turmoil in the Middle East has pushed local populations into surrounding territories stoking immigration fears. In addition, the U.S. Federal Reserve may hike interest rates up to three times. Aligned pressures on the U.K. government and a strong dollar will likely keep the British Pound weak for the anticipated future.

The Federal Reserve, Rates, and Finance

Central banking is arguably one driver generating social pressures. With rates at near zero, there is little incentive to save and strong pressure to lever up on debt. The Fed has poured strong monetary fuel on the global economy, leading to heavy investments in some areas of the energy sector (shale and natural gas) and in some housing markets. Low financing costs drove oil well completions upward and technological innovation in horizontal drilling created an oil glut that recently initiated intervention from OPEC to stabilize oil prices. Onyx Research anticipates that the Saudi's and to lesser degree OPEC will attempt to prop up oil prices at $50-$60 per barrel. 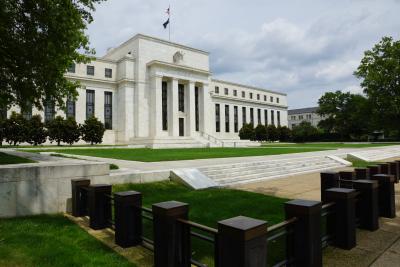 Established housing markets will likely see flat or declining home values as the Federal reserve begins to hike rates. Markets like Manhattan have seen home prices weaken from frothy highs with a 13% pull back for a typical two bedroom property.

One of the more notable graphs in recent years is the “elephant” graph produced by the World Bank. 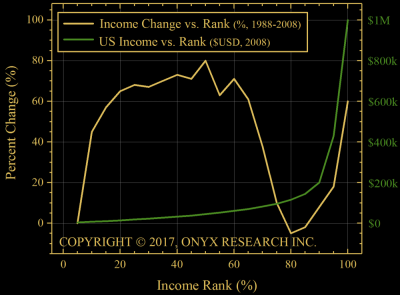 The popular press has suggested that this graph underpins what brought Donald Trump to power—the export of American middle-class jobs to foreign countries.

While true that globalization has brought a massive supply of inexpensive labor to market, the trunk of the “elephant” is likely the result of global digital transformation. It shows that a majority earns money by exchanging time for an income and a minority does not. The sharp trunk trough is certainly interesting. It likely shows that the top 10% earn money in other ways. They may be highly skilled or independently wealthy people (senior managers, entrepreneurs, bankers, lawyers, doctors, or trust fund recipients). This segment likely generates a significant income from investments and may employ less skilled labor. The gap between the two groups likely shows that business success is on average binary. Your firm dominates a market, or you fall back from employer/investor to employee status.

The five year drilling increase fueled by initially high oil prices and rock bottom financing in the U.S. came to a sharp halt in the last year. Rig counts in the U.S. are down by approximately 66%. With Russia, Saudi Arabia, Mexico, Venezuela, and the United Arab Emirates relying heavily on oil and gas wealth for economic stability, sharp capital expenditure reductions and an OPEC agreement on output limits brought spot oil prices back from the mid $20 range to the mid $50 range. Rig counts increased slightly in 2016, but not enough to bring oil prices back down to historic lows as of January 2017.

Trump has indicated that he intends to bring much of Americas shale energy reserves to the surface. With interest rates as a headwind and oil currently at a price generally accepted as stable for the industry, prices may decline if drilling increases and drilled but uncompleted wells (DUCs) are completed. This trend may also keep the dollar strong in 2017 and other oil producing currencies weaker (Mexican peso, Russian ruble).

Looking for knowledge unique to your needs? Click on the Onyx Premier Black icon below.